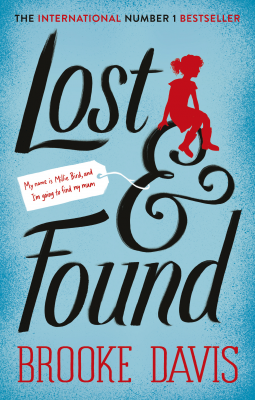 Millie Bird is a seven-year-old girl who always wears red wellington boots to match her red, curly hair. But one day, Millie’s mum leaves her alone beneath the Ginormous Women’s underwear rack in a department store, and doesn’t come back. Agatha Pantha is an eighty-two-year-old woman who hasn’t left her home since her husband died. Instead, she fills the silence by yelling at passers-by, watching loud static on TV, and maintaining a strict daily schedule. Until the day Agatha spies a little girl across the street.Karl the Touch Typist is eighty-seven years old and once typed love letters with his fingers on to his wife’s skin. He sits in a nursing home, knowing that somehow he must find a way for life to begin again. In a moment of clarity and joy, he escapes.

Together, Millie, Agatha and Karl set out to find Millie’s mum. Along the way, they will discover that the young can be wise, that old age is not the same as death, and that breaking the rules once in a while might just be the key to a happy life.

What first drew me to this novel was that it had been likened to The Hundred Year Old Man which I bought many years ago but have never gotten around to reading. But reading the blurb of both novels I could already see the similarities even down to the fact that once I’d read them I thought ‘this is going to be hilarious, I must have them’. And I wasn’t disappointed, I found this novel to be laugh out loud in places, uncomfortable in others and even heart-wrenching in places. But what impressed me the most about this story is its ability to deal with very difficult issues like that of loss and death and abandonment in ways that you wouldn’t necessarily expect as well as bringing genuine life to the characters and their perspectives.

Each character reacts to and deals with their lose in different ways, the most amusing being Agatha who chooses to become a nightmare neighbour, never leaving her wilderness of a home and yelling at passers-by . The most interesting being Millie, Davis seems to get right into the psyche of a child and perfectly displays what you’d imagine the inside of a child’s head to be. But at the same time capturing the simplicity with which children can see the world and cut to the heart of an issue without worrying about propriety, applying unique forms of logic leading to moments of complete and profound clarity like the passage below:

‘The start date and the end date are always the important bits on the gravestones, written in big letters. The dash in between is so always so small you can barely see it. Surely the dash should be big and bright and amazing, or not, depending on how you had lived. Surely the dash should show how this Dead Thing had lived. Did Errol ever know that his life would be just a dash on a gravestone? That everything he did and all the food he ate and the car trips he took and the kisses he gave would all end up as a line on a rock? In a park with a whole lot of strangers?’

What really strikes you throughout this novel however is the sense that neither generation seem to be able to get a handle on the world, to make sense of the people around them. We are never given the perspective of anyone who is not a child or an octogenarian but we are shown their interactions with the average citizen but only as far as to show how our protagonists consider the world. The phrase ‘Once an adult, twice a child’ has never been more apparent than while I was reading this book. Those at the beginning of life are still learning how to navigate the world and society and those at the end of their lives come to realise that it doesn’t matter what you do because ‘you’re going to die’ as Millie would tell you… repeatedly so do what you like.

Considering that, by and large, this novel comes across as a comedy or at the very least highly amusing, it deals with very complex and very dark issues. The comedy makes it more palatable but I found a deep sadness at the heart of this story that when I let my mind linger on it made my eyes well up and my heart sad. But I also found an admiration for Davis because it is she that has achieve all this, taken the time to consider these topics and put them across to the reader that makes it enjoyable to read but does not compromise the tragedy of it whilst acknowledging that it’s never too early to consider the world and it’s never too late to reclaim it.

I know, I know, I’ve loved every novel I’ve reviewed so far but what can I say? I know what I’m going to like and I very much liked this one. I whole heartedly recommend this book to any and everyone. I might even go so far as to say this is my favourite book for review to date (out of all three of them, yes). Worry not, I will be reading Disclaimer by Renee Knight next and I have no idea how I will feel about it, it’s a bit out of my wheelhouse but I will keep you posted. But yes to sign off, I challenge you to read the blurb and not think that Lost and Found is a must read…

Posted by mattissecover on December 7, 2014 in Literature Review