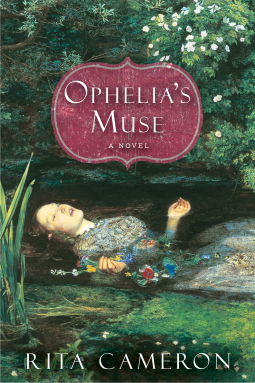 “I’ll never want to draw anyone else but you. You are my muse. Without you there is no art in me.”

With her pale, luminous skin and cloud of copper-coloured hair, nineteen-year-old Lizzie Siddal looks nothing like the rosy-cheeked ideal of Victorian beauty. Working in a London milliner’s shop, Lizzie stitches elegant bonnets destined for wealthier young women, until a chance meeting brings her to the attention of painter and poet Dante Gabriel Rossetti. Enchanted both by her ethereal appearance and her artistic ambitions–quite out of place for a shop girl–Rossetti draws her into his glittering world of salons and bohemian soirees.

Lizzie begins to sit for some of the most celebrated members of the Pre-Raphaelite Brotherhood, posing for John Everett Millais as Shakespeare’s Ophelia, for William Holman Hunt–and especially for Rossetti, who immortalizes her in countless paintings as his namesake’s beloved Beatrice. The passionate visions Rossetti creates on canvas are echoed in their intense affair. But while Lizzie strives to establish herself as a painter and poet in her own right, betrayal, illness, and addiction leave her struggling to save her marriage and her sense of self.

I was initially drawn to this book for two reason, one of which (as is to be expected) was to find out more about the subjects of the novel the other being that having been introduced to and thoroughly enjoying biographical fiction through The Determined Heart.  Having studied Pre-Raphaelite art and Christina Rossetti briefly at university I was intrigued to know more about them and their lives and this book offered a more interesting way to explore their lives than an ordinary biography or google. Part of me also wanted to see if I would enjoy the genre as much as I did when reading about Mary Shelley or if it was just a fluke; which I can now confidently say it was not. It’s difficult not to draw comparisons between Lizzie Siddal and Mary Shelley as they seem to have lead very similar lives dealing with the same difficulties. Both showed artistic talent in a world that was dominated by men, both had their reputations ruined due to pre-marital affairs, both had to cope with the loss of a child/ren as well as unfaithful husbands. The difference between the two women is that one of them managed to overcome all adversity and the other was crushed by it. However, neither are given the recognition they deserve for their the accomplishments they achieved in spite of the difficult lives they lead.

In this particular novel, Rita Cameron adopts a very relaxed style of narrative that occasionally can leave the writing feeling in authentic but mostly allowing the reader to better connect with the storyline and characters. It is clearly very well researched but as with all biographical fictions you are left wondering how much is accurate and how much is embellished as it is impossible to know what a person was truly thinking at any one moment in their lives or the exact wording of a private conversation. However, at the end of the book there is a very informative and insightful Q/A session with Cameron explaining her interest and writing influences. For example, I found it interesting to note that when researching for the book she began by looking at all the paintings and works of the characters featured in order to gain an impression of them, a truth that shines across time through their work, before looking at biographies and letters etc. She states that her particular method was to effectively use factual biographical events to structure the novel but the private scenes between characters where born out of her impression of the people themselves gained through their works. To have this insight into the writer and the writer’s processes, especially as a début author, I found not only invaluable but also integral to my understanding of the novel itself. The Q/A puts to bed any unease you feel about how much of the story you can take to heart as fact or just another fiction.

When looking at this period in art the focus is largely dominated by the Pre-Raphaelite ‘Brotherhood’ rather than ‘Sisterhood’ as I’ve seen it described on occasion. Therefore it is wonderfully refreshing to have the focus shifted from the pioneering men to the revolutionary women, more revolutionary in fact as it was seen as just an idle past time for women rather than an actual worthy pursuit. However, once again I can’t help feeling rankled by the inequality and often times injustice foisted upon women. Rather than tear off on a rant about how unfair the way of the world was, I will instead accept that there is nothing that any of us can do to change that period (or any) period in history and instead be thankful for all that has happened in between then and now to try to address the imbalance. However, I will mention that one of the things that shocked me was the way in which women were treated by the medical profession, perhaps I shouldn’t have been shocked but there you have it. Lizzie Siddal often suffered from ailing health for one reason or another and was seen by many doctors which Cameron includes in her life story. However, it is the idea that many of the doctors just sent her off with a handful of drugs and said ‘There, there, you must be tired. Stop painting, it’s too hard on you, it’s a men’s pursuit anyway and get some rest. Perhaps go for a walk, you’ll be fine’. Yes, I know at this point I’m once again supposed to say, society wasn’t as advanced as it is now they didn’t know any better, I should judge history by modern norms but come on! But fine a shall say no more on the subject, just that although I know that I’m not supposed to dwell on these things I do anyway and there’s nothing you can do to stop me! So there!

What I did enjoy about the novel was the ‘supporting cast’ if you will, the other characters/artists that float in and out of the her life and therefore the story. Why I loved it was because you get the impression that they all have their own stories to tell but because they are not the focus of the novel their appearances are more like cameos. Almost as if a person’s life is like a corridor that you’re wandering down and you come across a door with someone else’s name on it, you could choose to open it and wander down their corridor or stick with the one you’re on. For example, Lizzie’s life story intersects with John Millais, the effects of which change her life forever, but then his name is brought up here and their in passing. Such as his affair with and subsequent marriage to Effie Grey, about whom a movie was not long ago released, but because the story is focused on Lizzie, that particular storyline is just let go. I love the idea that each artist has their own story that intertwines with all the others but is fundamentally its own. If Rita Cameron were to write a similar book for each of them as a collection I’d read every one. But once again I’m rambling. But I will say that Rita Cameron leaves you with a desire to know more, see more and read more which is what I think an enjoyable novel should do, the moment you close the last page you want to open another. I enjoyed and was thoroughly moved but this novel, I personally can’t wait to see what Cameron does next!

Posted by mattissecover on September 8, 2015 in Literature Review