The Old Vic’s Screening of ‘The Crucible’ 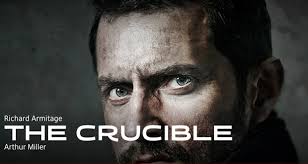 Before watching this production of The Crucible I knew very little about the play and even less about the Salem Witch trials so I went with a completely open mind. When my friend first asked me if I wanted to go with her I agreed purely for the opportunity to go to the Old Vic and see the wonderful and dashing Mr Armitage live. It was later, and much to her mirth, that she informed me that I wouldn’t have to figure a way to get down to London on a Thursday after classes and be back in Nottingham for classes Friday morning.But my little anecdote illustrates the beauty of theatre screenings in local cinemas, making powerful, moving and renowned plays more accessible those who show an interest but are not fortunately situated and for that I am supremely grateful. The Crucible is not one to miss, it was crafted so simply but left the audience feeling raw and some (myself included) moved to tears. Visceral is absolutely right, feelings of fear and dread for characters but also a feeling of futility as you know there’s nothing that as the audience you can do to stop it.

The fact that you are watching on a screen rather than in the theatre does dramatically alter the way you watch it but with this production there was the impression that the directors were aware of this and used it to their advantage, to support the production as a whole. One example of this is during the set changes. At the theatre you would normally just sit and ignore the fact that various people walk on and off the stage with the set because you know it’s not a part of the play but it is a necessity. But because the camera mediates what we see in the cinema, the production team is a liberty to play with what we see. In the case of this screening slow motion and layering of frames were used to distort the stage so that yes we could still see that the props were being changed but the actors were also kept in view at all times but moving unnaturally slowly and somewhat transparent. This added to the eerie supernatural feeling that underpins the play itself. There was also excellent use of non-diagetic music to once again leave the audience feeling on edge and uncomfortable. I cannot say whether the music was used in the theatre production or purely for the screening but the use of music vs silence was expertly balanced. There were times when I hadn’t even noticed that the dark poignant had started up again until they stopped, leaving an eerie silence and a creepy stillness.

The play itself is testament to the actors and their talent as there is actually very little action to speak of throughout, barring the viciousness movements of the girls being possessed. There was mostly dialogue, conversation between characters but at no point did the story feel like it was dragging because of it. I never found myself asking when something was actually going to happen. In fact, when the intermission commenced, one of my friends turned and said ‘has it been two hours already?’ the drama was so gripping. If anything, because there is such a stillness about the play, it makes it all the more startling when there is suddenly an outburst of movement. I especially liked that the production was performed in the round which gave the camera the liberty of capturing any angle, nothing was hidden from us. The audience was all around and so the actors were more authentic as they didn’t have to cater to the fourth wall.

Arhur Miller’s play by nature makes you question ideals such as truth, honour, theology and loyalty to name a few. As I have never seen another production of The Crucible I cannot vouch for how successful it ordinarily is to convey those complexities but I will say that in this production I would defy anyone to come out the same person that they went in. I defy anyone not to leave heart sore or at the very least reflective. If this production is being shown at a cinema near you I implore you, take the time to go and see it. It is truly worth three and a half hours of your time more than any evening tv you could surely catch up on another time.

Posted by mattissecover on December 5, 2014 in Cinema Review, Theatre Review

I'm kind of a big deal